In recent months, I?ve heard quite a bit of ?chatter? about the independent, low budget film, Juno. Have you seen it? The film revolves around a quirky 16-year old girl who conceives a child out-of-wedlock and decides to relinquish the baby to another family for adoption. While I enjoyed it, I was also troubled by a few things in the picture. First off, though I know it?s just a movie, but portions of it struck me as hopelessly unrealistic. For example, the pregnant girl?s dad and step mom are extremely calm when she breaks the news to them. Now, I made some poor choices when I was young, maybe not with similar consequences, but even more to my point ? my folks weren?t nearly half as measured as those in the film. Most mothers and fathers will eventually come around, but it?s reasonable to expect them to first let off some steam. These parents acted as if their daughter had broken a window, not altered her entire future.

A Look Ahead to the New Year!

January is the time I sit down and set goals for the coming year. I should probably do this in December, but with all the things that go on then it just isn't practical for me. Not only do I try to set personal goals, but Need Project also works on goals for our ministry. It can be difficult to decide what we can accomplish in a year, with so many variables out of our control. What will the economy do? Will donations be up or down for the year? Last year fires and floods changed a lot of what we were able to get done. All we can do is lay out our dreams, outline the biggest ways we hope we can make a difference, and then realistically assess the probability of accomplishing those goals this year. We have big dreams, many of which are in the process of becoming reality and will take many years to be realized. But if we break these goals down into smaller pieces, maybe we can reach them sooner than if we wait to achieve everything at once.
The first of our goals this year is to reach out to dads in greater numbers. In many families Dad is the breadwinner; perhaps he doesn't spend quite as much time around the kids as Mom. This doesn't mean he isn't struggling to provide for his family and be a leader. As a dad, I know we deal with things differently than our wives, but we need support and connection with others just as they do. We created "3 Things I Wish Someone Had Told Me" just for dads, and we want to get it into the hands of dads who may be in need of encouragement. We want to tell them they aren't alone, that other dads have been through the same things they're going through and are there for them. Our goal is to get 1000 printed copies into the hands of these dads.
Second, one of the goals of Need Project from the start has been to support families. When parents of special needs kids are surveyed, isolation is a topic that comes up very often. Many parents feel they are the only ones in their situation, and don't feel any connection with others because they are dealing with things their neighbors and friends don't understand. Our Parents Helping Parents project aims to interview parents about the situations they face and the struggles they are dealing with, helping other parents break free from isolation. Everyone's circumstances may be a little different, but raising a child with disabilities is not something anyone has to face alone. Telling the stories of parents who have navigated these experiences successfully will provide helpful information for other parents as well as encourage them by proving that there are those who have gone before. This year we are thrilled to have entered into a partnership that will help us get this project off the ground. We are so excited to see this initiative evolving and hope to announce more about it soon!

The other evening I was standing in the back of a graduation ceremony. It was a two-week summer program one of my sons was in, our middle child. It is a program we sent our oldest to before and it is a great college prep program. This program helps high schoolers be prepared for what they will see in college, it is an intensive program that really opens there eyes to how the world will be once they leave home.

It began with the usual thanking everyone who played some role in making the program happen and all of the usual pomp and circumstance that goes along with these ceremonies. But as I watched what was transpiring from the platform a young man came and sat down in the grass in front of me. I would not have noticed him at all had he not started immediately to fidget and rock in his place. I also noticed that soon after he arrived so did a young lady who sat next to him who began talking to him and she was clearly watching over what he was doing.

Since, because of our own child with a disability and the last 15 years of serving families with disabilities, I saw some of the behaviors I am familiar with and I made a few assumptions. I assumed he was the sibling of someone in the program, coming to watch the event with the rest of us. After all there were children from all over the U.S. and a few from other countries. Surely he would cheer when his siblings name was called and my suspicions would be validated.

A COMOTION ABOUT EMOTION

As far back as I can remember, Jerry Lewis has been hosting his annual Labor Day weekend telethon. Frankly, I don’t think I’ve ever watched more than two minutes of it, despite considering this tradition a generous gesture.

I’ve never taken the time to learn of his initial motivations. I always just assumed he was a man with a big heart and a desire to help hurting kids. I’m also not aware of how much money he’s raised for the Muscular Dystrophy Association, but assume it’s in the billions of dollars. And I don’t even know very much about the MDA, but just by its mission, I’ve always considered it a worthy organization.

This week while I was wandering about the internet, I came across several sites which were adamant in their opposition to the MDA Telethon. There was a common theme running throughout the discussions. All of the sites were hosted by disabled people who were offended that Jerry Lewis, according to them, plays on the viewer’s emotions and basically guilt’s them into giving to the MDA. They cited how common it is for the telethon to show cute little children in various stages of challenge.

At the heart of this discussion and opposition is their desire to be respected and not pitied. They seek equality not sympathy.

3 Things I wish someone had told me!

As I was talking with another parent the other day, I took a moment to listen to her family's story. I realized in the process that someone who didn't know either of us would probably look at our families and put them in the same category. We both have children with special needs, yet our families' experiences couldn't be any more different. Even if our children had been dealing with the same diagnosis, the paths we would have taken to get where we are today would have been radically different. I was struck by something else I had never noticed before; I as a dad have a much different view of our story from even my wife. We men deal with situations very differently than our wives, and this makes the story for us very different. Neither of these perceptions is bad or wrong, only different; men and women need to approach their stories in their own distinct ways. While I see a lot of women sharing each other's burdens, which I think is healthy, I don't see a lot of us men sharing. We do a lot for our families, but we don't spend much time on ourselves.
Now that my son is in his twenties, I have spent more time reflecting on past years, and the things I had to learn over those years in order to be the father and husband I needed to be. I can tell you, I have by no means arrived at a place where I am a model father or husband. I have absorbed a few lessons over the years though, lessons I hope to pass along to others. I hope I can help other fathers avoid some of the hard knocks I took in the learning process.
That's why I created "3 Things I Wish Someone Had Told Me" a booklet for dads who are newer to this thing we call parenting. I wanted dads to know that while they are trying to figure out a new diagnosis they are not alone. There are those of us who have gone through this before, and we want to be there for you.
We want to get this into the hands of as many dads as we can; this is why we decided to give the booklet away for free! You can download the digital copy from our website using the link below.
Our goal is to give away 1000 printed copies in the first quarter of 2014. This is where we need your help! Each copy costs us $2.00 to print. For the same price as a small cup of coffee, I can get a copy of our booklet into the hands of a dad who needs to hear that he can make it through the tough time he is facing. More importantly, he will be reassured that he can be there for his family in this critical moment. Isn't that worth a cup of coffee? 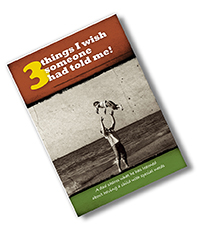 Help us support dads. Download and share the digital version with all the dads you know, and donate to help us reach out too!